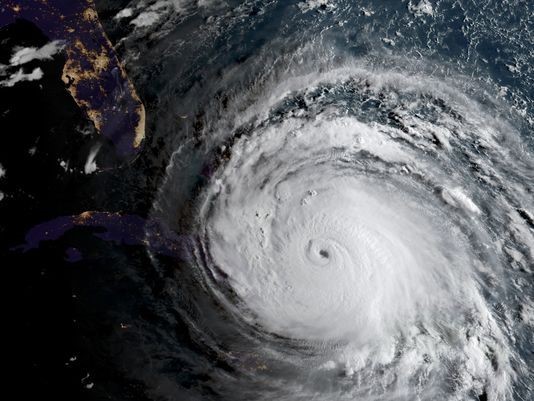 With Ex-Ophelia currently hitting the headlines and the UK's shores, Terrafirma's Engineering Geologist Codi Morton explores the links between hurricanes or storm events and ground instability.

Hurricane Irma’s path of destruction through the Caribbean, Florida and beyond is a harsh reminder of how mother nature can take us by surprise. With winds speeds varying from 75 mph - 94 mph (category 1) to a peak of 180mph (category 5), it’s no wonder they are calling it the most intense Atlantic hurricane to make landfall in Florida.

With Irma’s wind speeds dropping as it moves over the western Florida peninsula, after entering the state as a category 4 storm, we put the spotlight on the after-effects and consequences of such a powerful force disrupting the land and potentially triggering ground instability in areas previously thought safe. It is no secret that surface instability in the form of voids and sinkholes are a common occurrence in states such as Florida and Alabama, both of which were in direct line with the pathway of Hurricane Irma.

How do hurricanes affect ground stability?

What are other secondary risks and disasters which could be triggered from a category 4/5 hurricane making landfall?

Let’s put the focus on the coast line and land which has been heavily affected, the Florida peninsula. Florida’s flat geography makes it incredibly vulnerable to hurricanes and fluctuations in water levels.

Irma’s wind direction has had an alternating effect on the water level, strong winds blowing from the northeast have pushed water out of shallow parts of bays and harbours in Florida city creating a ‘reverse storm surge’. CNN meteorologist Judson Jones reported that, "As soon as the wind shifts direction, the water will come back quickly and continue to move inland," resulting in a storm surge and sudden increase in water level.

How could this alternating storm surge affect the ground stability?

Most of the Atlantic coastal plain, which Florida is associated with, consists of what is known as “Karstic terrain” meaning evaporitic rock such as gypsum, halite (salt) and carbonates such as limestone are prominent. Natural voids of varying size easily develop in this type of terrain via water migrating through the rocks and slowly eroding the soluble rocks forming spaces and caverns. According to the USGS, up to 20% of U.S. land is susceptible to sinkholes with states such as Florida being a hotspot.

A suddenly disturbed ground water level acts as a catalyst for the movement of migrating water, percolating through the karstic terrain voids therefore amplifying the dissolving process. As the water level is drawn back due to the force of the hurricane the ‘rapid draw down effect’ can cause strain on the multiple voids or caverns within the limestone karst terrain. If there is not enough support for the land above the spaces then a sudden collapse of the land surface can occur. When a sinkhole collapse occurs it usually has a dramatic entrance as the land usually stays intact for a while until the underground spaces just get too big. This has had a large impact in residential areas where properties have been significantly damaged and devalued.

Bringing it all home, the UK experienced the effects of sudden water level change in 2014 due to mass rainfall from storms in December 2013 to January 2014. A sequence of storms derived from a succession of low pressure systems across the Atlantic brought record levels of rainfall mainly affecting south-east and central - southern England region. The sudden increase in saturated ground increases the overlying load beneath which natural voids or abandoned mine workings could exist. The UKs dense history of past mining activity coupled with sudden increases in ground saturation has led to the collapse of many unknown (unrecorded) excavation features such as the ‘Denehole’ which collapsed in the central reservation of the M2 in Kent.