This post will cover year-on-year changes in mining depth using Terrafirma’s 25m resolution Working Depth Model (WDM), a point cloud of 33 million points representing all known underground coal workings in the UK. The WDM includes individual depths below ground level, depth relative to sea level and a working date for each point, allowing the UK’s coal workings to be explored in 3D on a national scale. This blog will also touch on year-on-year changes in new coal workings from 1750 - the present day.

The earliest known records attributed to coal mining date back to the late 2nd Century. The Romans exploited shallow coal fields with their limited skillset and tools, before leaving Britain several hundred years later. In their absence, recorded coal mining fell quiet until the early 12th Century, where it resurfaced once again, this time as a source of fuel on a relatively small, shallow scale.

By the 14th Century, the coal industry had grown to produce a few thousand tonnes per annum. Shallow coal seams were in great abundance at the surface. Extraction methods began on a localized scale; shaft design tended to be simple, shallow and often lacked support structures and safety features. However, large quantities of coal were left in deeper, unreachable seams in the ground as extraction methods were primitive, lacking technology and engineering. In this period, the plentiful supply of coal at the surface matched with the economic viability did not require advancements in deeper coal extraction. For many centuries coal mining grew exponentially, until it was later named the Industrial Revolution of the 18th Century.

In its height, the coal mining industry had supported the UK through multiple world wars, ever increasing production to meet demand. Coal mining became progressively profitable during the 19th Century, leading to advancements in extraction methods and safety. Technological development throughout the 19th and 20th Century improved the productive capacity of mines, resulting in deeper shafts which could access multiple coal seams. This trend could not have come at a better time for the UK, as shallower coal resources had been exhausted throughout the centuries, with many historic shallow pits deemed uneconomic by the late 20th century, pushing extraction deeper underground.

While the inferred relationship between time and mining depth is built on sensible historical and economic principles, it has not been verified statistically on a national scale. Terrafirma’s WDM has made several analyses of this relationship possible. Fig.1 plots year vs working depth for 1 million random 25m sections of coal workings in the WDM. The maximum significant depth has been set at 95% (2SD) for each year between 1750 - present and has been plotted to illustrate that the depth of the deepest workings tends to increase year on year, which can also be observed from the raw data. A line of best fit calculated using polynomial least squares has been plotted to illustrate the overall trend of the data where it is clouded by the density of points. For the purposes of this blog, the relationship between the variables has been investigated using two simple statistical analyses; Pearson correlation, which investigates the linear relationship between two variables (e.g. as x increases, does y increase by a proportional amount) and Spearman correlation, which investigates the monotonic relationship between two variables (e.g. as x increases, does y consistently increase from one point to the next at a rate that is not necessarily constant). The Pearson and Spearman coefficients have been calculated as 0.397 and 0.363 respectively for this random dataset, indicating a moderate-strength linear relationship between working depth and working age.

Since the sampling in figure 1 is random, it is possible that multiple WDM points may be used for a single panel, given that some panels are hundreds of metres across and the WDM is at a 25m resolution. Therefore, the noise of this figure can be drastically reduced by taking an average depth across each panel, as illustrated in figure 2. This reduces the number of points represented to approximately 150,000, which also allows the distribution of the points to be better observed. The mean yearly working depth has been imposed on this graph, which shows excellent agreement with the calculated polynomial regression (line of best fit) between the peak years of regulated coal mining.

It may be most accurate to only consider the period between the Coal Mines Regulation Act and the decline of coal mining (1872-1990), since this is the period during which the largest quantity of accurate data was collected. 30.9 million points in the WDM are from between these years, approximately 92% of all of the points in the WDM. A very strong linear relationship, and an even stronger monotonic relationship, can be observed between working depth and time during this period. This serves to illustrate the statistical relationship between coal working depth and time. Terrafirma have also used the WDM to estimate the area of total new coal workings developed each year from 1750 – 2010, as shown in figure 5. 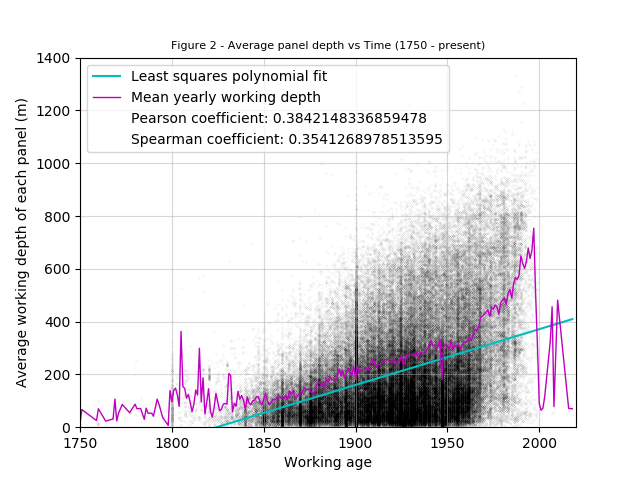 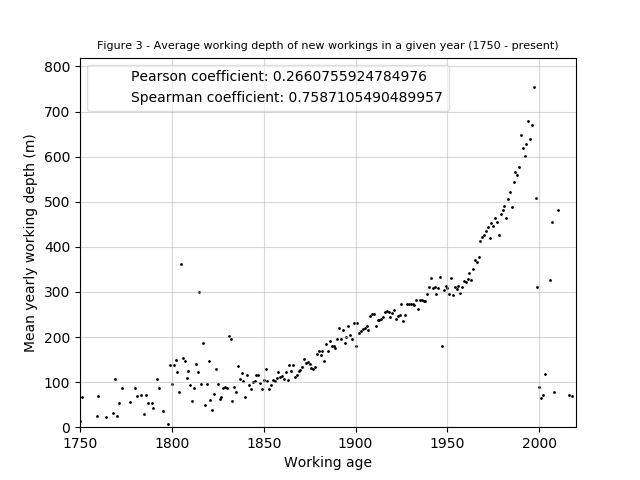 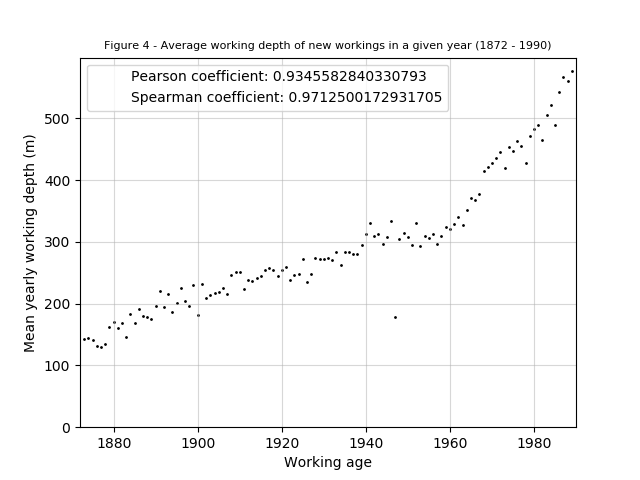 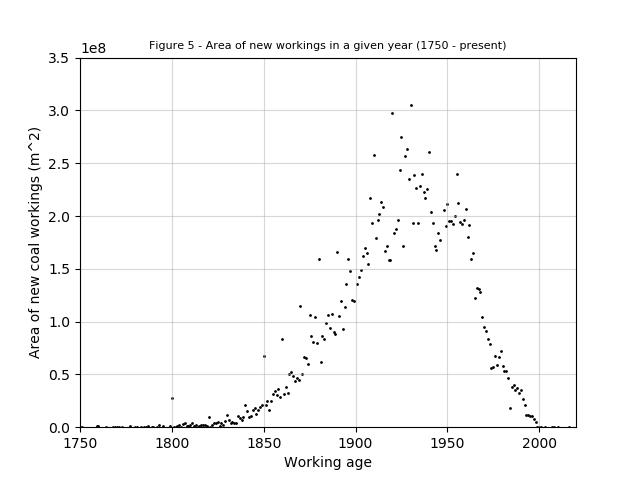 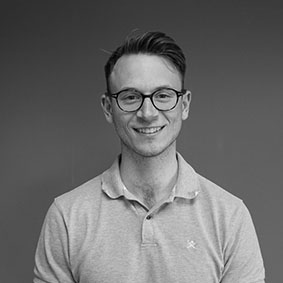