Early on the 6th November a sinkhole appeared adjacent to a block of flats in a residential area of St Albans. Early reports of the collapse noted an approximately 6 metre wide hole located next to an exterior wall of an apartment building at Cedar Court. Terrafirma investigates the possible causes beneath the collapse for BBC Radio below:

The location of the sinkhole so close to one of the walls led to the flats being evacuated as a precaution (1). Structural engineers and teams from both the local council and utility suppliers are now at the scene to assess the damage, however, it is unlikely residents will be allowed back into their properties for a number of weeks. One witness highlights the hole is approximately 3 metres deep meaning the collapse is of notable size and a full structural and geotechnical investigation will now be required to ensure there is no impact on the integrity of the nearby wall (2).

Of course, this isn’t the first time this has occurred in St.Albans, with a ‘sinkhole’ in 2015 at Fontmell Close gaining global media attention after a 33 feet deep collapse appeared (3). The collapse at Fontmell Close resulted in several homeowners being evacuated from their properties, some not returning for over 12 months and with an estimated council remediation bill of over £1000,000.

Although the site of Monday’s sinkhole is not directly related to this event, over 2.5km south west from Fontmell Close, it is possible to have been caused by a similar problem, hidden beneath our feet.

The ground collapse in 2015 at Fontmell Close was later confirmed to be linked to ancient brick clay quarrying and it’s associated underground chalk mining. It was an area of St Albans that had been extensively exploited for clay and chalk over a period of several centuries, with the earliest recorded clay quarrying in the 15th Century. A combination of expert interpretation of available records by Terrafirma and the results of extensive ground investigation proved an early prediction that this sinkhole was linked to underground mining for chalk. A mine shaft, extending from the base of a historical clay pit had been poorly capped and the voids, associated with the chalk mine below the pit, had compromised the shaft, eventually leading to the collapse of the void and the infilled clay pit above. The resulting crown hole (colloquially known as sinkholes) caused extensive damage to the surface, denied access and utilities to homes for many months and was seen across the world in global media.

Historical clay extraction and the associated chalk mining is a common cause of ground collapse or sinkholes that have appeared over the past decade (and before), with notable collapses in Pinner, Hemel Hempstead, High Wycombe, Plumstead, Greenwich and Dartford since 2012. Despite the ancient nature of the mining that is causing these sinkholes, the expert interrogation and analysis of available records can often provide an accurate insight into where and even when they might occur, using innovative satellite data technology. As with the examples above and the sinkhole at Fontmell Close, the collapse on the 6th November at Cedar Court and particularly the historical, geological and topographical context of the vicinity shows startlingly similar characteristics.

Cedar Court is located on the northern boundary of a former 1920s-30s brickworks and clay pit, north of Hill End Train Station With geological conditions similar to the nearby Fontmell Close, historical chalk extraction and their associated underground voids can not be discounted. In fact, at Cedar Court, chalk appears even closer to the surface and with underground chalk extraction such a common but poorly recorded association with brickworks, it is possible that this collapse is a crown-hole event as opposed to a natural sinkhole.

Ancient chalk mining is not always related to nearby clay pits and a huge number of smaller but sometime prolific chalk mines are associated with ancient agricultural practises. There are many hundreds of them recorded across south and east England and they are often found above glacial soils and near to field boundaries or ‘dells’, ancient woodland designated for chalk extraction. The chalk, or the lime within the chalk, is spread across the surface to improve the productivity of the soil. These glacial soils are present beneath the Site and the site also lies adjacent to the historic ‘Chalkdell Wood’ (figure 2) suggesting that this area of St Albans may have been linked to the extraction of chalk for many centuries. Although mining is not often associated with towns like St Albans, with the word often more commonly linked with the coal industries of Yorkshire or South Wales, numerous chalk mines are recorded across Hertfordshire and therefore a link to mining activity beneath Cedar Court will need careful investigation to ensure this problem doesn’t occur again in the future.

Until extensive geotechnical investigation and remedial works take place, it is not possible to know for sure whether the cause of the collapse is linked to ancient agricultural chalk mining from Chalkdell Wood associated chalk mining from 1920s brickworks, or potentially another cause, such as the natural dissolution of the chalk beneath the Site. However, the nature of the collapse and the impact it has already had on residents only serves to highlight the importance of understanding the ground beneath our feet and with new technologies and data available, it is now possible to do this cost effectively and proactively.

At Terrafirma, we aim to synthesise and interpret hundreds of datasets by expert geologists, engineers and environmental scientists to provide clear and concise risk assessment for ground hazards. Our goal is to enable everyone to understand the ground, translating the complex risks into practical advice and proactive management. We have developed our unique Ground report to include a full risk assessment of all mining in the UK alongside an expert analysis of the risk from natural ground stability, radon, mineral planning and fracking hazards, enabling a tailored professional opinion and bespoke recommendations for property and land transactions. 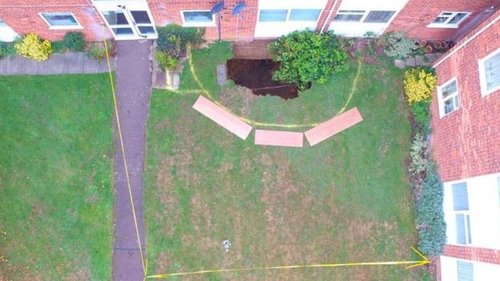 Copyright of Herts Fire and Rescue 2018