The Impact of Coal Mining

The mining of coal and other minerals has shaped the country we live in today, from the rail network to the materials used to construct the homes we live in. Several centuries of extraction to fuel this tiny island’s global domination has inevitably left a scar that we must not forget, but often do, only reminded of it when it periodically and metaphorically rears its head from the ground beneath our feet. Across almost every corner of every county in the UK, past mining activity still poses a myriad of physical, financial and legal liabilities, a huge proportion of which will never become a realistic problem for the everyday, however, for the unlucky ones the impact can be significant, disrupting livelihoods or more importantly in the current climate, reducing the value of property and land.

Almost a third of all buildings in the UK are underlain by coal mines, not even beginning to include other mineral mining industries, so it maybe it isn’t difficult to understand then that every week of every year, somewhere in the UK there is a claim made to rectify the physical damages caused by mining activity. To put that into financial perspective, there has been approximately £40 million of damages paid out to properties in the last decade and that is only in coal mining areas. Read on to explore in more detail about the impact of coal mining on property and land across the UK.

There are two usual suspects when it comes the physical risk of past mining activity. The first is deep mining, often linked to more modern mining processes and therefore to more modern times, with the majority of dcep coal mining occurring post the turn of the 20th Century. This meant that the mining was often better regulated, recorded and remediated but the action of taking considerable volumes of coal from the ground has inevitably led to the lowering of ground in certain parts of the UK. Ground movement often occurred on a large scale and impacted many properties in a community, for example, in some areas of East Nottinghamshire, over 75% of the properties in a village have at least one subsidence claim on title. These subsidence claims for deep mining are ongoing, with damage claims of over £9 million paid out to homeowners in 2016 and 2017 and in 2018, the Coal Authority will pay its largest ever damage claim out to homeowners in West Allotment, Newcastle.

The other culprit is shallow mining. Often neglected for the sole reason that shallow mining can be much, much older than deep mining in the UK and is therefore usually not property identified and assessed, particularly during the construction of property in mining areas across the 20th Century and up until the present day. Whereas deep mining is more modern, better regulated and recorded, shallow mining is the opposite and records depicting the extent of mining activity close to the surface are sparse to say the least. Shallow mining however is prolific, with over 1.5 million properties situated above recorded shallow mining and a further 1.25 million buildings situated above suspected shallow mining. Unlike deep mining, ancient extraction near to the surface often presents itself more locally and is the origins of events call ‘coal mining-related hazards’, more colloquially known nowadays as Sinkholes. Every year, there are over 500 of these coal mining sinkholes appearing across the UK, from the valleys of South Wales to the suburbs of Newcastle and their impact can be devastating to home and business owners alike.

You do not have to look far back in time to find the most recent evidence of mining impacted upon everyday life, only a week before this article was written a sinkhole in Wigan denied the access of seven families to their homes. As is often the case with sinkholes, the more realistic problems associated with the hazard are the denial of access or utilities, often for several months as the mining collapse is investigated and remedied to ensure there are no longer-lasting effects. This was epitomised by the huge chalk mining sinkhole in St Albans in 2015, which denied four families access to their homes for over two years.

As previously mentioned, property has been constructed and land developed across former mining areas throughout the past century. As is often the case, the developers neglected the potential for shallow mining to cause future ground movement and damages to the property and it is therefore not surprising that mining-relate sinkholes most often occur within properties built between the 1970s and the 1990s. As we approach the present day, you would expect that with stricter modern planning and building regulations, subsidence and collapse from past mining activity should never impact upon new builds, right?

A case in point:

Wrong. As homeowners at Bayfield Estate, West Allotment in Newcastle recently found out. Families were originally evacuated in June 2016 and then permanently relocated in January 2017 after severe mining subsidence damage initially threatened five properties, later extending to a further 15 properties. In January 2017, five houses on the estate were demolished, with a further 10 scheduled for demolition, costing £95,000, with a total housing development loss of value of around £3 million.

Bayfield Estate is one of many examples of new-build developments being affected by historic mineral extraction within a few years of completion, and this unprecedented increase in cases is a stark warning for housing.

These shallow mine workings were undocumented by The Coal Authority (TCA), and without the (now available) addition and interpretation of other mining, land-use, industrial and investigation data, the risks were not evident during preliminary due diligence when the land was originally purchased or later when the houses were constructed.

The dreaded mine shaft

The other culprit for mining-related liabilities is a mine entry. These vertical (shaft) or horizontal (adit) entrances to underground mines are numerous, poorly documented and often unreliably capped. It is a common rule of thumb in engineering and mining geology that for every recorded mine entry, there are two more unrecorded within 100 metres and with 172,000 recorded Coal mine entries and over 200,000 recorded non-coal mining entries, the math on the actual number hidden beneath our feet is daunting, particularly within heavily mined areas of the UK. Similar to deep and shallow mining, despite being numerous, the likelihood of a mine entry collapsing is proportionately small and the statistical chance of mine entry causing damages to a property are even smaller.

The real problem associated with mine entries, especially related to property and land, is their tendency to impact the sale value of property and land. As above, the likelihood of subsidence problems related to old mine shafts is remote, and consequently the location of the mine entry should not significantly alter the valuation of a property.

Therefore, from a logical perspective the value of the property should only be marginally affected, however the public’s perception is not always based on logic and it is likely, that one will find that a re-sale of a house within the vicinity of a mine shaft will prove more difficult than would or should normally be the case.

In July 2018, Terrafirma became the first commercial company to be licensed to produce the official CON29M Coal Mining Report. The Terrafirma CON29M Report offers property and legal professionals a level of interpretation, risk transfer and client protection not previously available. The report contains an expert professional opinion that is backed by comprehensive terms and conditions, with all liability for the outcomes of the report passing to Terrafirma, protecting the client, lender and solicitor.

The Terrafirma CON29M is integrated seamlessly into our new flagship property risk product, The Ground Report, launched in September 2018. Included as standard, the official CON29M is clearly summarised on the front page and uses the the Ground Reports unique UserKey to easily translate the 11 questions into next steps, where necessary. The CON29M (2018) includes the full question set and expert interpretation and professional opinion also found within the standalone report. 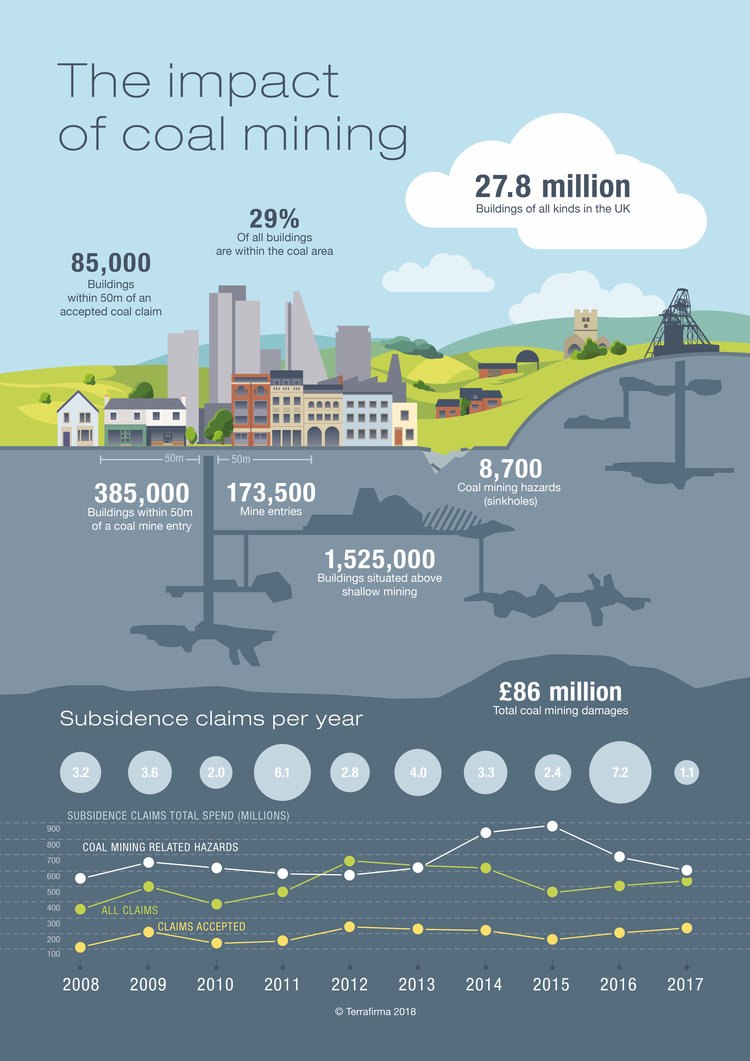 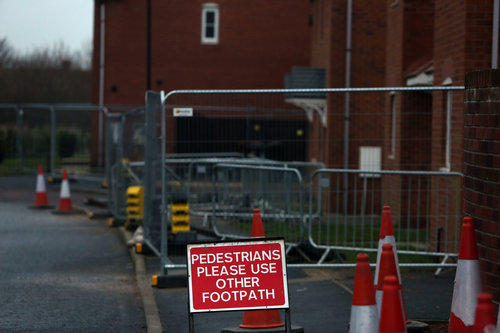 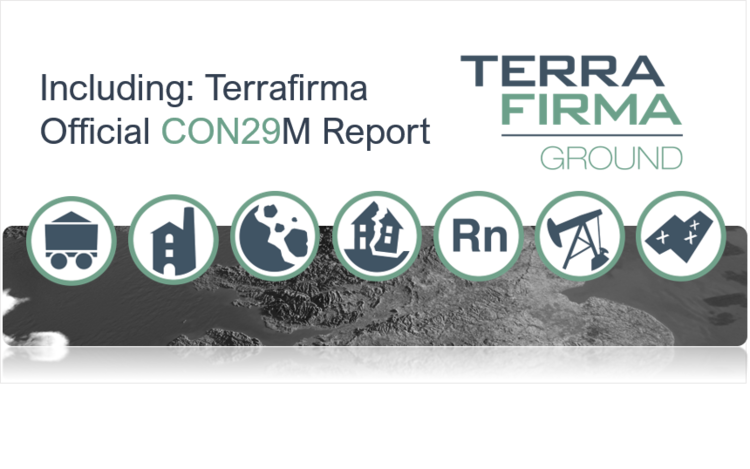