On September 25th 2017, a large sinkhole appeared on the pavement at a pedestrian crossing in Brow Gate, Baildon, causing traffic disruption indefinitely. According to a pedestrian, the sinkhole opened within a time frame of a few minutes. Gas engineers from Northern Gas Networks are assessing the damage. The local geological conditions are favourable for subsidence; superficial till (composed of clay) deposits shrink under prolonged dry conditions and 19th Century, unrecorded utilities infrastructure may be the cause of the collapse.

The sinkhole is unlikely to be a result of historical mineral extraction; historical maps and other data sources have not recorded any mineral extraction features at this location, nor within the local area. Thus, the void is probably related to the subsurface geological conditions or utilities failure.

Another possible cause of collapse is the presence off a Victorian Era Culvert that runs in a northwest-southeast trend beneath the site. Historical land use records show what appears to be a channel drilled laterally beneath a residential terrace that used to be situated on what is now the road. This culvert may deteriorated and eventually collapsed under the road.

The local geology may be a key contributing factor to this sinkhole. Data sources related to historical land use and high resolution topographic data cannot be used as evidence for this sinkhole because the sinkhole is non-mining related. However, site surveying may be able to detect a void prior to collapse.

The local geological conditions and historical land use maps do not indicate this sinkhole is a result of mineral extraction. Although the sinkhole is non-mining related, the local superficial geology is till (composed of clay) which tends to shrink under prolonged dry conditions and swell under wet conditions. Thus, soil shrinkage in the subsurface is a likely contributor to this sinkhole. Voids can also develop due to aging of utilities; leaking drains and water mains act to soften the ground and in some cases actively wash it away. This process may be accelerated by water percolation into the subsurface due to persistent rainfall. Additionally, vibrations caused by heavy, constant traffic on the road can consolidate and settle subsurface material, resulting in a void which subsequently causes collapse. 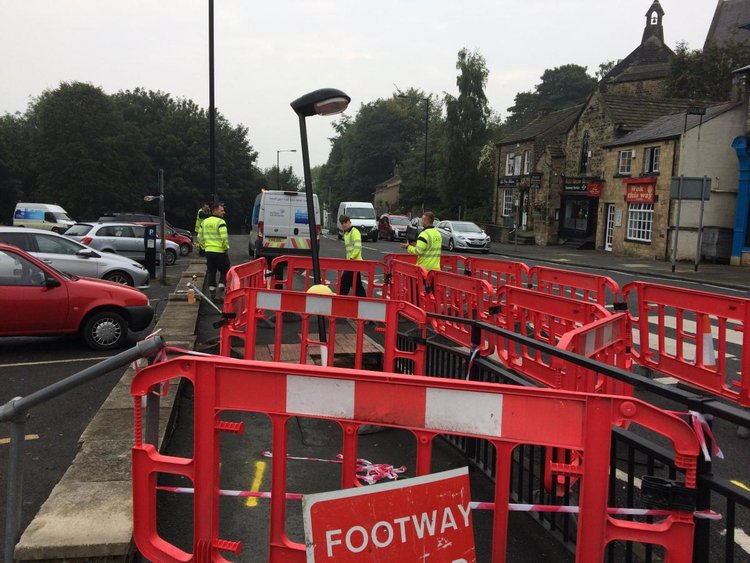 Image courtesy of Telegraph and Argus.com