A sinkhole has been reported to have occurred within part of Beechwood Avenue, Cimla in South Wales. This is the second reported sinkhole in the neighbourhood after another ground collapse, later identified to be a mine shaft, opened up in January of 2016. The sinkhole is now being investigated to identify whether it is associated with the extensive shallow coal mining known to have occurred in the area during the 18th and 19th Centuries.

Upon further investigation, an additional 20 recorded mine shafts are located within 200 metres of the most recent sinkhole. The sinkhole is highly likely to be attributed to historical coal mining activity. Similar in both shape and location to other sinkholes that have occurred within the immediate area, it is also likely to have been triggered by ageing and faulty utilities infrastructure that underlies the road. Final conclusions on the investigation of other nearby sinkholes were that shallow coal mining features, known as ‘Bell Pits’, and mine shafts have collapsed causing ‘crownholes’ to appear at the surface.

Numerous data sources can be combined to build a clear, accurate and reliable picture of the coal mining activity and consequently the potential hazards that exist in the vicinity of Cimla Road and Beechwood Avenue. Historical mapping, land use, geological, mining and site investigation records indicate substantial shallow coal mining is located beneath the residential estate, dating from before the turn of the 20th Century.

Combining data and technical expertise, a light can be shone on the scale of shallow coal mining in the locality. Records indicate that several coal seams are present within the bedrock beneath a thin covering of glacial sands and topsoil. One of these coal seams, locally named the ‘Swansea No.3’, was extensively mined by the nearby Gnoll Colliery in the 19th Century. Upon further investigation, an additional 20 recorded mine shafts have been identified within 200 metres of the most recent sinkhole in Beechwood Avenue, 4 of which are already known to have collapsed into sinkholes, one of which was the sinkhole that occurred in Cimla Road in January of 2016.

The sinkhole this week has also collapsed directly above a known mine shaft, likely connected to substantial underground coal mining due to the scale of mine waste tip recorded to have historically enclosed it. Considering the extent of other mine shafts in this area, further collapse and sinkholes is considered highly likely without further investigation and remediation. 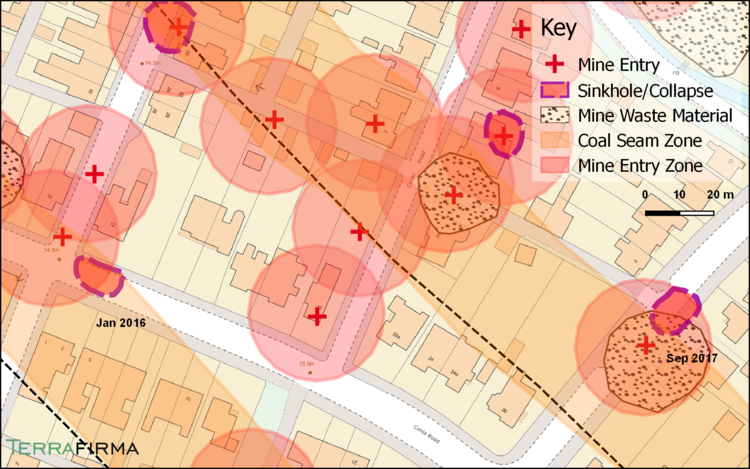 Map of recorded and suspected coal mining in vicinity of Cimla Road, Neath.