As lots of people were making their way back to reality from their summer holidays, a few members of the Terrafirma team made the journey down to Cornwall to explore the historical mining landscape, guided by Dan Berriman of Cornwall Consultants.

The photos (right) show the same location separated by more than 100 years: The top photo was taken on our excursion in September 2019 and the bottom photo was taken in c.1890s. The intensity of mining in the Redruth area is illustrated by the presence of numerous mine engine houses that dominated the landscape. A few chimneys are visible remnants of this huge industry.

The first stop on our tour was a little mine on the coast at Portreath Beach, an unassuming spot juxtaposed with sand, surf and paddling pensioners. This, Dan explained, is of a much smaller scale than most Cornish mines but provides the perfect model. From the picture we can see three levels of mining separated by layers of rock within a mineral lode comprised of tin ore. The levels within a typical mine would be separated by approximately 20-30 metres of rock. The photo shows three levels of mining in the cliff face.

Steel rings which are still prominent on the side of the mine entrance reveal that a door was once placed there so that the miners could work during high tides with the waves ominously lapping up just outside!

The next stop was Wheal Peevor, a reclaimed area that is now popular with mining enthusiasts and dog walkers alike. The mining history of the site is hard to miss, with several large stone engine houses dominating the landscape.

Wheal Peevor: several engine houses are still located on the site and can be explored by the public. This building housed the engine associated with a 201-metre-deep pumping and haulage shaft. These housed the engines used for different functions in the mining process. One of the engine houses was for a pumping and haulage shaft. The shaft is can be seen at the surface today, covered and made safe by a metal grate. Despite there being no danger, we did hesitate slightly when stepping out over the 201-metre-deep void!

With a new sense of the scale of the workings and the intensity of mining in the area, we travelled into St Day, town of the wealthy mine owners of the time. But the grand buildings are not the only legacy of its rich mining past. A collapsed shaft in its centre serves as a visible reminder of this history and heralds the challenges that will continue to be faced in mining areas in future. 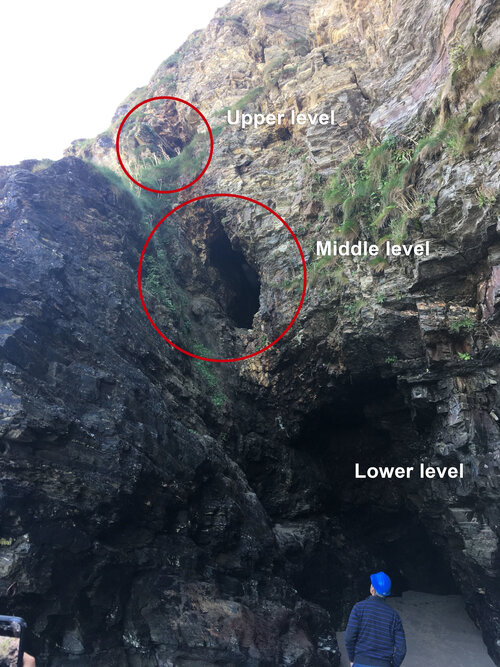