The Slippery Truth About Landslides

The recent heatwave, and subsequent thunderstorms have taken it’s toll. Flooding and landslides have been prevalent in the news lately with disruption across the UK and Europe; freak hailstorms and landslides affected the Tour de France last weekend and flooding has closed roads and damaged bridges overnight in Yorkshire (5).

According to the National Centres for Environmental Information, June in Europe was the warmest June on record – a record that spans 110 years, and the year thus far has been the 3rd warmest for Europe. France has been very warm for an extended period of time – with the almost back-to-back June and July heatwaves.

Those of us who followed this year’s Tour de France will still be reeling from the last-second upset to the competition: Julian Alaphilippe’s lead, which he had held for 11 consecutive days, suddenly ripped away from him after stage 19 was abruptly cancelled due to hail and landslides. Whether he would have caught up in the last kilometres of the stage remains a question for sports pundits. The incident got me to thinking: why haven’t I seen this sort of thing before? And is it related to Europe’s record-breaking summer weather?

Watch a video of the landslide that stopped Stage 19 this year and you’ll see a slurry of mud and rock roll out along the road. This type of landslide is called a debris flow. These form when the surface sediment becomes saturated with water, say after periods of intense rainfall. Debris flows can only move down sufficiently steep slopes, so they stop on flat surfaces (say roads on the Tour de France route) and block them.

A cursory check for landslides over the history of the three grand tours of road cycling (Giro d’Italia, Tour de France, Vuelta a España) reveals only three more incidents resulting in changes to the planned route; only two of these were due to actual landslides*. The events in past tours have received significantly less attention, having occurred long before cyclists set off. Of particular interest is the closure of the Chambon Tunnel before 2015’s tour, as this offers an interesting counterpoint to the recent landslides.

The 2015 Chambon slide was a deep-seated landslide. This type of landslide affects material below the soil layer (specifically below the deepest tree roots), and is typically very large and slower than a debris flow. The Chambon slide moved an estimated 800 000 m3 of slate [1] and took months to finish moving. Like debris flows, steep slopes and water both play a role.

The important factors in slope stability, then, are slope steepness and water. Steepness, as you might imagine, is difficult to control in the entirety of the French Alps. Indeed, landslides are quite common – despite the few occurrences in the world of pro cycling. Water, however, is an element that is changing.

There are two specific concerns here: the number of rain days and overall rainfall. The link to overall rainfall is obvious – more rain, more water, less friction holding the slope together. That to the number of rain days may seem less clear. If you recall secondary school geography, you will remember that rainwater either percolates into the soil or runs off the top on hitting the ground. A problem arises if the rain falls faster than it can flow through the soil. After enough time, the subsurface will become saturated in water, leading to floods and landslides. One way to get such intense rain is to have the same amount of rainfall as usual spread over fewer days. This extreme rainfall just gets more dangerous if it falls on dry ground after a period of drought.

The closest place to Stage 19 of the tour recorded by Météo-France (the French equivalent of the Met Office) is Bourg-Saint-Maurice. Like the stage, it is in the Savoie département. This shows that the landslides were preceded by over a week of drought, followed by over half a month’s rain in three days – just when the Tour was passing through the region. Indeed, the region has had only six rain days (of over 1mm) this July, compared to an average of 18 over the last decade. Could the less rainy July we saw this year become the rule, rather than the exception?

The link between extreme rainfall and landslides has led to concern that climate change will exacerbate risks. Indeed, the International Panel on Climate Change (IPCC) has said: “extreme precipitation events over most of the mid-latitude land masses … will very likely become more intense and more frequent” [2], a view backed by many scientists. Studies modelling drought and flood risks predicted an overall reduction in rainfall with more intense events [3].

What this means for landslide risks, however, is unclear. A 2016 review on the subject concluded that, though 80% of studies identify a causal link between climate change and the frequency and magnitude of landslides, this will be difficult to notice compared to more direct human impacts on slopes: deforestation, overgrazing, over steepening [4].

All this is not to say that climate change isn’t something to be worried about. The IPCC say it is likely that the last 20 years were the warmest in over a millennium, and that humans have contributed to observed warming with a >95% level of confidence [2]. The interaction between the climate, the environment and humankind is complex. But it is clear that climate change is happening, and it may well be worth preparing for less stable slopes. The next French landslide might not just disrupt a sporting event.

*Stage 17 of the 2009 Giro d’Italia skipped the French Alps due to risk of landslides, but as far as I can tell, none occurred.

Data from Météo-France has been used. 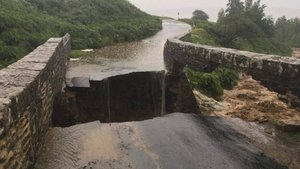 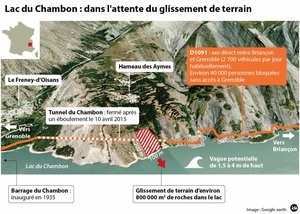 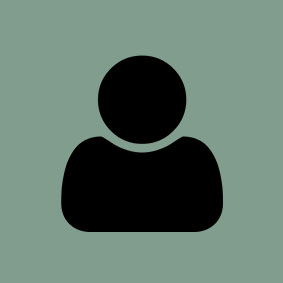