West Wales Sinkhole Forces Closure of The A40

A sinkhole was discovered at 6pm on Wednesday 18th April on the A40 near Llandovery in Carmarthenshire [1] and [2]. Police say the sinkhole has been treated but the road remains closed in both directions causing heavy traffic due to the particular section of the A40 being an essential road for connecting West and North Wales.

Carmarthenshire is now developing a reputation for the surprise appearances of sinkholes. Only two weeks ago a sinkhole reported on 2nd April 2018 appeared in Merthyr Tydfil within a new build site and in 2016 a 30ft wide and deep sinkhole collapsed underneath an empty storage shed collapsed at Towy View Park in Capel Dewi.

Carmarthenshire rich history of non – ferrous metal mining activity dating back to the 18th century that cannot be discounted as a potential influence for these events. While the cause of this this event is not yet known, sinkholes are synonymous with areas of historic mining activity, particularly near mine entries and mineral outcrops. These features often pose a greater risk of collapse when they are unrecorded and untreated.

As highlighted by this event, these collapses can cause significant disruption to local areas alongside the potential physical, financial and legal risks associated with their occurrence.

Terrafirma’s unique SinkholeAlert continues our ambition to better educate and alert prospective homeowners to the many and varied hazards and liabilities the ground poses. TerraSearch Assess identifies all reported sinkholes and ground collapse within 50 metres of a property and accesses a weekly updated ‘live’ database of 9000 sinkholes and ground collapses from across the UK. 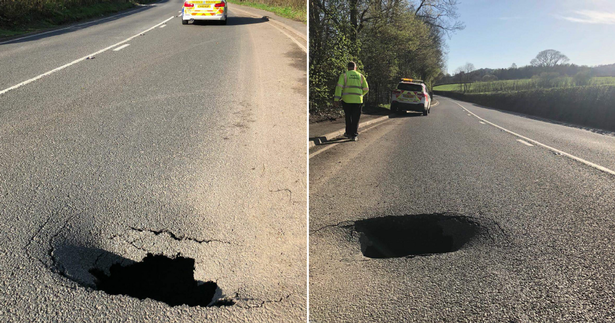