On 29th June 2017, a 6 metre wide and 3 metre deep sinkhole opened in the middle of a busy Liverpool commuter route to the M62, Edge Lane, closing it for several weeks. United Utilities were called to the scene to assess the damage and discovered the sewer 6 metres down was blocked. The area rests upon superficial till rich with clays which are prone to subsidence which in turn can damage subsurface utilities.

Sinkholes develop when voids in the subsurface become large enough for the overlying ground to collapse. This particular sinkhole is unlikely to be the direct result of historical mineral extraction but instead of utilities failures underground, washing away material creating a void into which the road collapsed. The utility failures (in this case the sewer) could have been caused by unrecorded clay extraction but more likely from the shrinking and swelling of clays putting strain on underground pipes.

The most relevant data for this particular site is local geology, particularly superficial deposits. Most data pertaining to historic mineral extraction is irrelevant for this case except for The British Geological Survey (BGS) britpits. Historic mapping is useful for depicting old workings and land use changes over time. Natural ground stability data including running sand and clay shrink swell can be used in conjunction with local geology data. With these data sources and interpretation by a qualified geologist, evidence can be constructed on the cause of this sinkhole as well as other potential geological hazards in the area.

The local geological conditions and historical land use maps do not indicate this sinkhole is a result of mineral extraction. There are recorded brick works nearby where the extraction of local clays would have fuelled the industry. However, these are over 400 metres away and the area around the sinkhole had already been developed. This suggests that clay extraction is unlikely to have occurred beneath the sinkhole location, but is a strong indicator of abundant clays in the area. The local superficial geology is of till, rich in clay, silt and sand, on top of Triassic sandstone. Clays have a significant water content which if changed causes the clays to shrink or swell. Thus it is likely that ground movements caused by the shrink-swell of clays (following adversely wet or dry weather periods) damaged the utilities beneath the road facilitating sewer failure. The sewer failure caused water to ‘wash out’ the surrounding till leaving a void for future collapse. These utilities can be further damaged/strained by vibrations and excess load from increasing traffic and congestion on the overlying road. However, the primary cause of damage is likely a combined factor of ageing utilities often laid down in Victorian times and the shrinking and swelling of clays putting strain on the structural integrity of utilities. 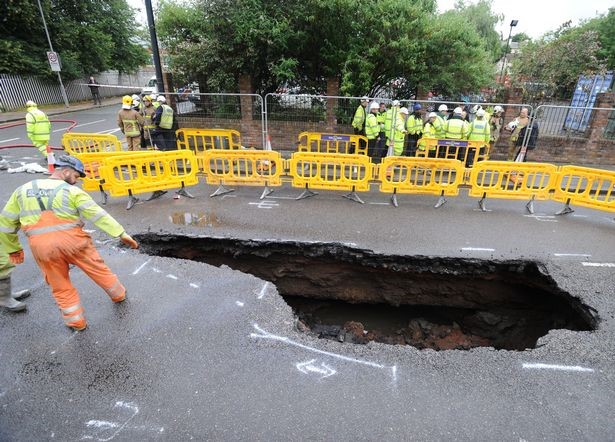