The recent severe weather has the UK on course for what could be the wettest June on record. Torrential and persistent rain has been falling across the British Isles, with some villages experiencing 73mm of rainfall in a 28-hour period.

This has resulted in The Environment Agency issuing 25 flood warnings and 64 alerts across the country. These alerts are concentrated in the Midlands and the North West, but rain warnings have been given across the country (1). While bursting river banks, flooded roads, stranded cars and cancelled sporting fixtures are just some of the mass disruption now experienced in the affected areas, there are other hazards that could be forming which may result in continued disruption.

Earlier this week, two sinkholes opened in the M25 forcing the closure of the road between junctions 4 and 5. The rapid increase in percolating rain water, combined with the extra surface load of standing water, may have helped facilitate the collapse of naturally occurring voids within the soluble chalk bedrock. Such chalk deposits are found within large areas of the south, east and north-east of England and so similar phenomenon may well occur elsewhere as a result of the prolonged rainfall. Furthermore, other soluble bedrock types (e.g. gypsum and rock salt in North Yorkshire and Cheshire) are prone to similar dissolution collapses, so such phenomenon may not be confined to chalk areas. These sinkholes can also continue to form once the surface water has dissipated as there will be higher ground water levels and continued dissolution – such sinkholes may therefore continue to appear weeks after the rain has stopped.

Another naturally occurring hazard resultant of rapid rainfall is the increased ability for mobilisation of loose, unconsolidated material by means of running water. Such mobilisation can occur underground and, in rare cases, can result in subsidence and/or sinkholes. Additionally, it can also facilitate landslips and debris flows, such as the recent cliff collapses near Cromer in Norfolk (2).

The coastline near Cromer in Norfolk is retreating by up to 2 metres a year through such cliff collapses. The water both increases the surface load of the cliff face and can help fluidise any loose material, increasing erosion rates and facilitating the collapse. These are all naturally occurring processes which are monitored by scientists. However, it is important to be aware of these natural hazards to ensure that we can take appropriate precautions and remain safe from harm following adverse weather. 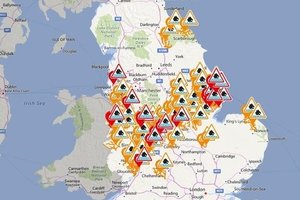 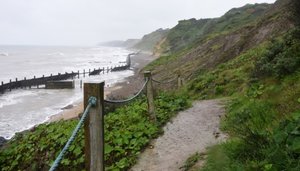