On the 2nd May 2016 a sinkhole believed to be 60ft deep and 16ft wide opened up on the doorstep of one of a new residential developments within Brickfield Cottages, Plumstead. The result of which led to the establishment of a 25m hazard zone and evacuation of 50 residents by the combined effort of the emergency services and a local housing association, all of which were provided with assistance at a council run rest centre and overnight accommodation by the housing association. Following this, on the 3rd May evacuated residents were reportedly staying with families or in hotels whilst structural engineers looked to secure the site. The result of which, 30 households were returned to normality, whilst 10 awaited contact by the housing association. The remediation efforts, whether planned, completed or on-going are unknown.

Is the issue caused by historical mining activity?

According to Dr Per von Scheibner several possible causes can be associated with the depression, these include the collapse of a previously unknown mine or fault passage of the South Metropolitan Mine, operational in the 18th-19th centuries. This theory was furthered by mining historian Dominic Clinton through the overlaying of known regions (no comprehensive survey is known to exist) of Cemetery Chalk Mine over Brickfield Cottages. From Clinton’s studies it was stated that “The terrace of houses in which the sinkhole has appeared should never have been built.”, whilst further criticising Skillcrown Homes for their lack of site investigations; “Skillcrown Homes only had three boreholes drilled into chalk on the plot before construction commenced, which is ridiculous,” “It should have been 200 or more.” From this it was recommended that emergency testing had be undertaken, an idea made all the more relevant considering that in the 1950’s gardens were constructed on the site after it was deemed too dangerous to develop on.

Yes, the most useful data source in this specific case are old maps. These can be easily obtained, sourced and used as evidence for the evolution of the site and surrounding area through modern history. In addition to this, desk based research into mining in the area, combined with BGS point data of national mine locations, allows for further evidence to be accumulated. The combination of old maps and research into known mines in the site’s proximity allows for the overlaying of recorded surface and underground workings in the area and digitised within GIS. These workings can then be further interpreted and added to through use of an array of additional The British Geological Survey (BGS) and lidar data sets to build up an idea of the subsurface geology (e.g. through borehole records) and therefore considered stability of the site alongside any areas of interest such as surface depressions. To provide further analysis, data on utilities, natural ground stability and hydrogeology which can be sourced from associated companies and scientific entities can be used as evidence against mining being the direct cause of ground movement in an area. Through a combination of the above data, evidence can be provided as to the cause of a specific sinkhole.

The site is located within an area that historically, was extensively exploited for chalk and clay resources. Evidence shows that following past extraction, the site was not built upon due to its known hazardous nature. Over time, such areas, previously perceived hazardous, are typically forgotten about, and in the case of Brickfield Cottages this seems to be case. The site exists in an area where underground chalk workings are present, it is considered likely, that due to the limited number of boreholes drilled during Site development, that the relevant information, including the location, extent and condition of workings was not acquired. Therefore, during site development, it is unlikely that the correct remediation works and/or engineering design of foundations was implemented to mitigate the risk of ground instability. In this case, the interaction between the load applied by the construction of the property and further ground disturbance caused by the overall development, likely resulted in the failure in the roof of underground chalk workings and the development of the sinkhole at surface. 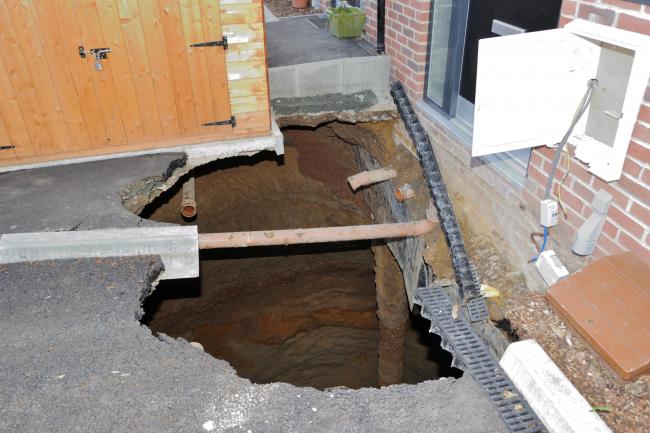 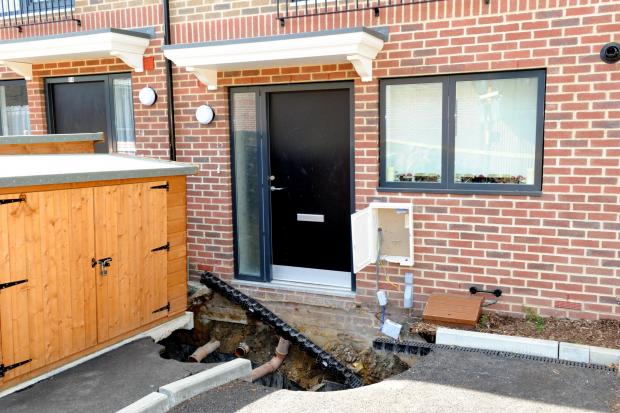