February: A Month of Winter Sinkholes

In the past few weeks, Britain has been hit by an earthquake, the beast from the east and sinkholes. We at Terrafirma focus on the latter. From collapsed mine workings to naturally unstable geological conditions, sinkholes are a very real and re-occurring risk to life and property.

Between the 14th-16th of February two sinkholes opened up in the City of Norwich, the second of which spanning over two front gardens in Meadowbrook Close. Although described by the water board as a ‘’red herring’’, a burst water pipe in the vicinity of the depressions remains a possible cause for the collapses. This said, mining cannot be discounted here, with the area known for its historic underground chalk extraction, which is also thought to have caused another sinkhole 250 metres northeast of the Close in 2015.

Further to this, on the 14th of February, on the pitches of Morriston RFC, Swansea, another sinkhole opened. Reported to The Coal Authority (TCA) on the 19th, social media blamed the 4.4 magnitude earthquake that rocked the west of the country on the 17th. Further investigations by Terrafirma came to a different conclusion, the playing fields, already the site of 2 past mine entry collapses, are underlain by deep mine workings and a coal seam along which multiple known mine entries and historical collapses are recorded. The sinkhole itself follows this same trend, and therefore, is most likely the result of an unrecorded mine entry or more ancient 'bell pit' mine collapse.

Not all sinkholes can be linked to mining however, as natural ground movement is another key geological avenue when it comes to subsidence and collapse. Ripon, a small town in North Yorkshire is geologically famed for natural subsidence issues, resulting from the natural dissolution of gypsum beneath its town footprint. On Saturday the 24th of February, another sinkhole open up in near the towns leisure centre, which was subsequently closed whilst remedial work was undertaken. This sinkhole is the 5th in only 6 months recorded by Terrafirma and our partners. 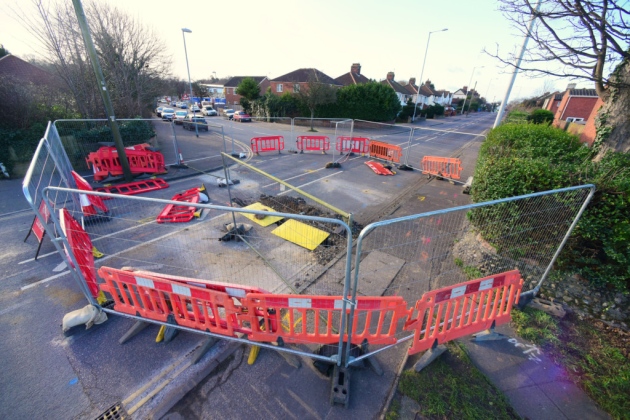 Road closed in Norwich due to a sinkhole. Image courtesy of Eastern Daily Press.com