Disruption in Durham and Dorset

As summer’s around the corner, is the warmer weather to blame for the recent sinkholes in Durham and Dorset? Using specialist GIS software and geology knowledge, Tim explores why two separate sinkholes appeared last week.

“On 9th May 2019, a huge sinkhole opened up alongside the Inland Coast Path on Bronkham Hill, Dorset. The hole was initially only the size of a dinner plate which formed in February and prompted investigation by the Dorset Council’s ranger team and geologists. They discovered that the small hole was covering a larger void up to 100 feet wide and 50 feet deep that formed during the last ice age. The chalk geology of the area is highly susceptible to such voids forming as the chalk bedrock is highly soluble; meltwater from the last ice age naturally dissolves this chalk bedrock forming large scale voids often only a few metres beneath the surface. These features can remain stable for thousands of years, but recent highly changeable weather conditions (for example the recent rainy period followed by a warm dry spell) can rapidly increase natural dissolution and erosion of loose material and is likely the trigger for this collapse. It is therefore, not unexpected that this collapse occurred at a similar time to the recent mining collapse in Durham, and could indicate that further collapses may occur over the next few weeks.

On 10th May 2019, a sinkhole opened up in the A689 at Wearhead, County Durham. The 3.5 metre deep, 2 metre wide hole forced the closure of the A689 and resulted in a 16 mile diversion for day-to-day commuters. Initial assessments have speculated that the sinkhole was caused by a collapsed culvert that was originally built to remove water from mine workings.

Wearhead is within an area that has been historically extensively mined for lead; the Wearhead Vein mine is located to the north-east of the village and is estimated to have been in operation between the 15th and 19th centuries. While the historic surface workings are visible even today as trough-like scars on the landscape, the historic underground workings are much less visible. The underground workings were accessed by mine shafts and more commonly ‘adits’ (horizontal/near-horizontal entrances into mines) that were dug into the hillside. In order to prevent these underground workings from flooding, drainage tunnels called “Soughs” were dug to remove water from the mines and allow safe working. While the adits and underground workings extended into the hillside, away from the village, the soughs were dug back through the village in order to drain water from the workings into the river. The presence of these soughs beneath the village, combined with the local soluble limestone bedrock, have likely resulted in natural limestone dissolution within the sough causing it to become unstable and result in collapse.” 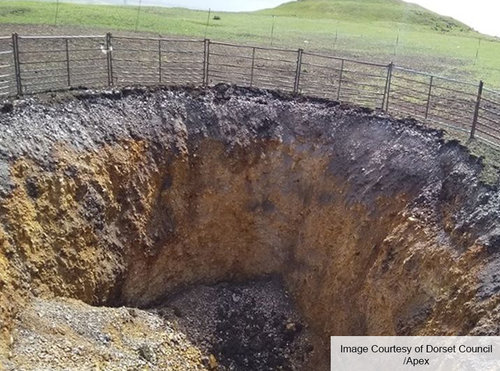 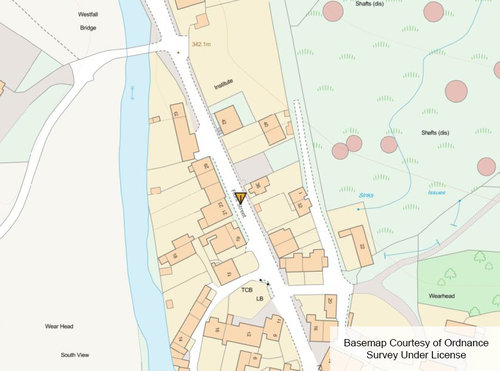